Christmas by the sea, among the villages of Croatia

From Porec to Rijeka in a magical atmosphere

Think of Croatia, the Istrian peninsula, the coastal roads that lead from Trieste to Dalmatia and you immediately think of the lines at the border, the smell of salt, Ćevapčići and the green bottle of Lasko Pivo resting together with the rest in kuna and lipa on the table of the shaded veranda of the Konoba.

Well, now delete many of these elements and rewrite the equation, almost completely. The cities of Istria have something to offer in December, when a varied program of events enlivens Advent in this part of Croatia.

Coming down from the north the first stop of Christmas on the Croatian sea is Porec (Poreč). Arrived at the small port you have the impression that the town has not much to offer to lovers of the Christmas spirit but just follow the music that spreads from the alleys of the pleasant old town to discover, under large pine trees decorated, the ice rink, the chalets, the games and the stage for the shows. To which are added the metal caravans and the scenery for the inevitable stop Instagram. The climate is certainly not that of the Alps, but the summer warmth is just a distant memory. And so Lasko gives way to a more appropriate glass of hot wine, a grappa with honey or a glass of Teranino, a liqueur derived from a red Istrian wine. When it comes to paying, you will discover another novelty: kuna and lipa are joined by euro, because from 1 January Croatia will start to use the common European currency. And also to apply the rules on free movement, so the borders to the EU will be definitively abolished and already the controls are only symbolic. The Christmas tour on the Istrian coast continues with Rovinj (Rovinj), almost a twin of Porec, although with a more spectacular impact thanks to the hill on which stands the old part and the high bell tower that dominates it. The Advent here takes place between the Port Square, where there are the Christmas tree, the houses for street food and hot drinks, the stage for concerts. Looking towards the sea, the lights mounted on the boats at anchor shine on the dark waters. And just beyond the lights there is the other Christmas location, that of the Plaza promenade, a more modern setting in the shadow of the Gran Park Hotel. The batana, the small sailing boat of fishermen, is the main leitmotif of the Rovinj Sea Advent. 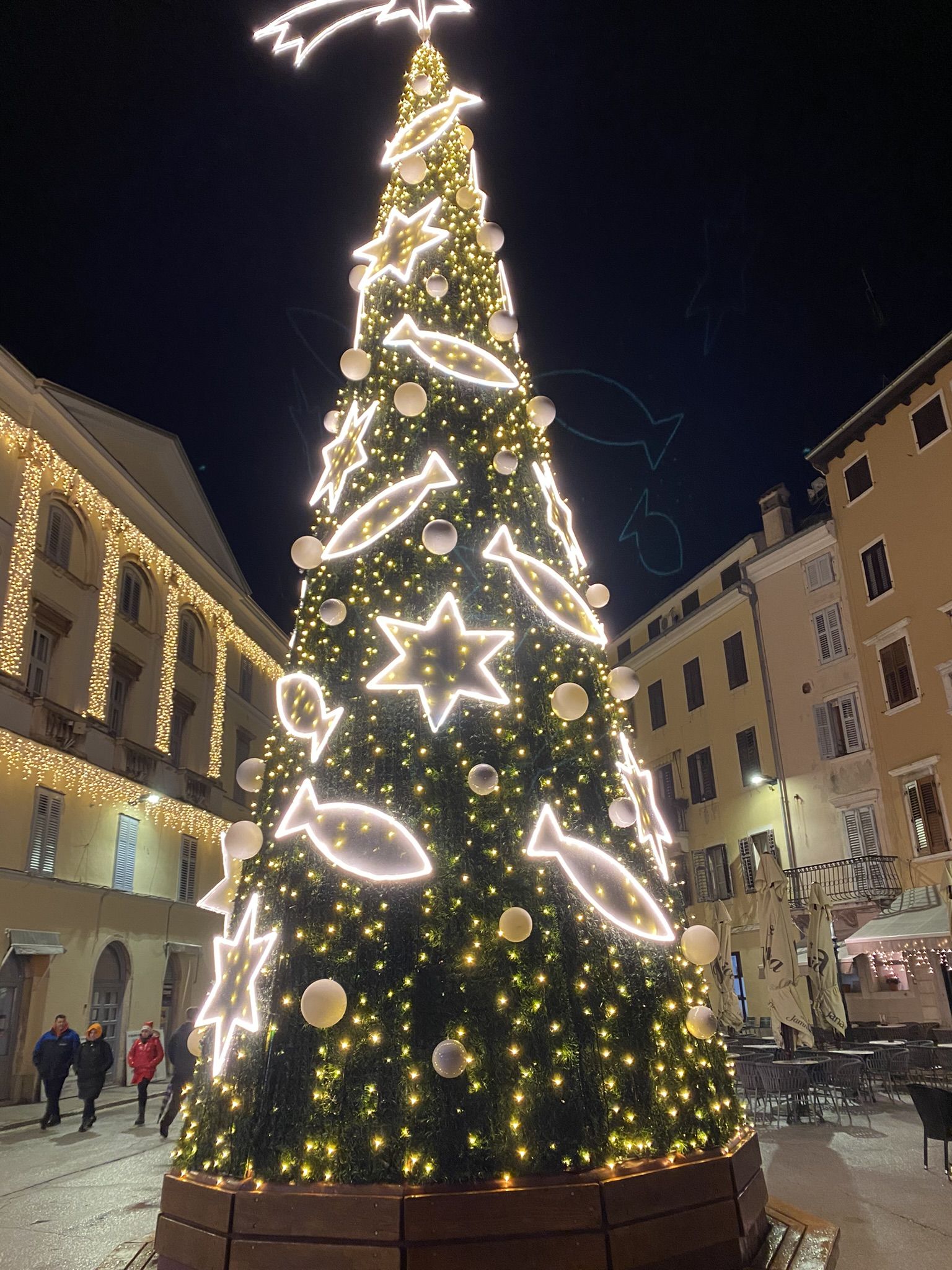 Continuing south, here we are in Pula (Pula), a port city whose historic centre reflects the contrast between the large industrial port and the extraordinary Roman amphitheatre. From there, turning around the hill with the ruins of the castle, or passing under through the particular tunnels of the ZeroStrasse, you follow the traces of James Joyce and many other illustrious guests who have stayed in the city over the centuries. In the Forum Square are grouped most of the Christmas attractions, which continue along the ancient walls and in the city park of Graz. After enjoying a nice ice skating on the large ice rink in front of the port and admiring the attractions of the gardens of the National Theatre, close in beauty with the climb to Tersatto, the castle that watches over the city from above. Here you will need sunglasses for the flooding lights while the chalets and the rooms set up in the tower will welcome you to recover strength and warmth after the long staircase traveled uphill. Do not miss the small crib set up in an underground room in the center of the courtyard.