Everything you should know about: Derry Girls

Being a Derry Girl is a state of mind

Derry Girls. Although this series has been featured on my Netflix homepage for quite some time, I have not immediately identified it as binge-watching material. I bet I wasn't the only one, am I wrong?

I checked the Italian Instagram profile of the series and found only a miserable post that announces the release of the second season, no memes, no screenshots to use as a background, practically as if it did not exist.

I watched it by accident, attracted by the title and the length of the episodes, just to get my “TV Time” counter up a few hours, yet I am here writing so as you can imagine it turned out to be a pearl.

Let's take a small step back in time, we’re in the 90s through the streets of Derry (or Londonderry, depending on your persuasion) in Northern Ireland.

It is not exactly the best time for a quiet holiday in the area, the last years of the Northern Irish conflict are shaking the nation and you could see unionists and nationalists, Protestants and Catholics, Irish and British, basically neighbors fighting each other.

Inserted in this context Derry Girls is an exhilarating, irreverent, at times blasphemous comedy that follows the daily vicissitudes of a group of losers and unruly girls: Erin, her cousin Orla and their friends Clare and Michelle. 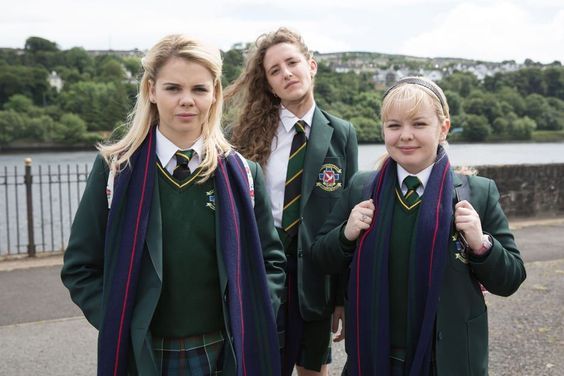 The gang is also joined by James, Michelle's cousin, who has just arrived from London and is forced to attend the Catholic women's school with them to avoid being bullied because of his marked cockney accent.

Bomb alarms and military searches are on the agenda every day, yet they seem the most boring and irrelevant thing in their lives, an annoying obstacle to the normal course of the day.

We’d expect that during the war everyone life is “frozen” by the scare of what’s happening above your head. Despite that, nobody wants to wait, young people are in a hurry to enjoy every moment of the total mess that is their life. They have far greater problems than a hypothetical terroristic attack, for example finding the perfect dress and boy for the school dance, studying for the exams, collecting some money to buy candies, reaching a concert despite the prohibition of the parents. Even during the meeting with the boys of the Protestant school, the priority is to find someone nice to flirt with in a bold and awkward way.

When the super charismatic professor De Brún asks the boys what they hate most the answers are as spontaneous as possible, like taking piano lesson or go to the church on Sundays.

The end of the second season is certainly a focal point of the series, in a crucial moment for the history and the politics of the nation friendship takes the lead over the events. I’m not able to think of a better description of what being a teenager looks like.

The real magic of this show is the celebration of the commonness of adolescence despite all, in stark contrast to the over-the-top stories that we are used to find when we look at a teen drama.

Erin, character inspired by the life of the creator Lisa McGee, is a Derry girl. Her friends are Derry girls. James become also a Derry girl. At a time when one's origin or belief could determine life or death being a Derry Girl is genuinely a state of mind, a way of being, not a label with which one is born.

Don't be scared by the vernacular slang of these girls, put subtitles on and go to spend a few hours in Northern Ireland.

Who get in trouble helping friends

Soft boys in a girls gang

10 make-up mistakes to avoid according to Elisa Grasso

We are (still) a network

Who to support in online shopping during the pandemic?