The Tie Dye: the democratic trend of summer

The perfect hobby at home, the perfect trend on the catwalk

Tie Dye is a fabric dyeing technique that is depopulating in the world of fashion and not. What makes it special is its simplicity which allows it to reach every target without budget and use limit. In fact, just after the lockdown period, it has become one of the favorite pastimes (and among the most instagrammable).

Many associate the origin of the Tie Dye with the cultural movements of America in the 1960s but in reality it has much older roots dating back to the first century AD. when, first the Indians and then the Asians, they used to dye fabrics with natural dyes. With precision it was the Indians who introduced the technique we know today: following the ancient Bandhani method, they tied the fabric with small pieces of string and subsequently immersed it in color; once dried the texture obtained was colored, irregular and different from any other previously obtained. 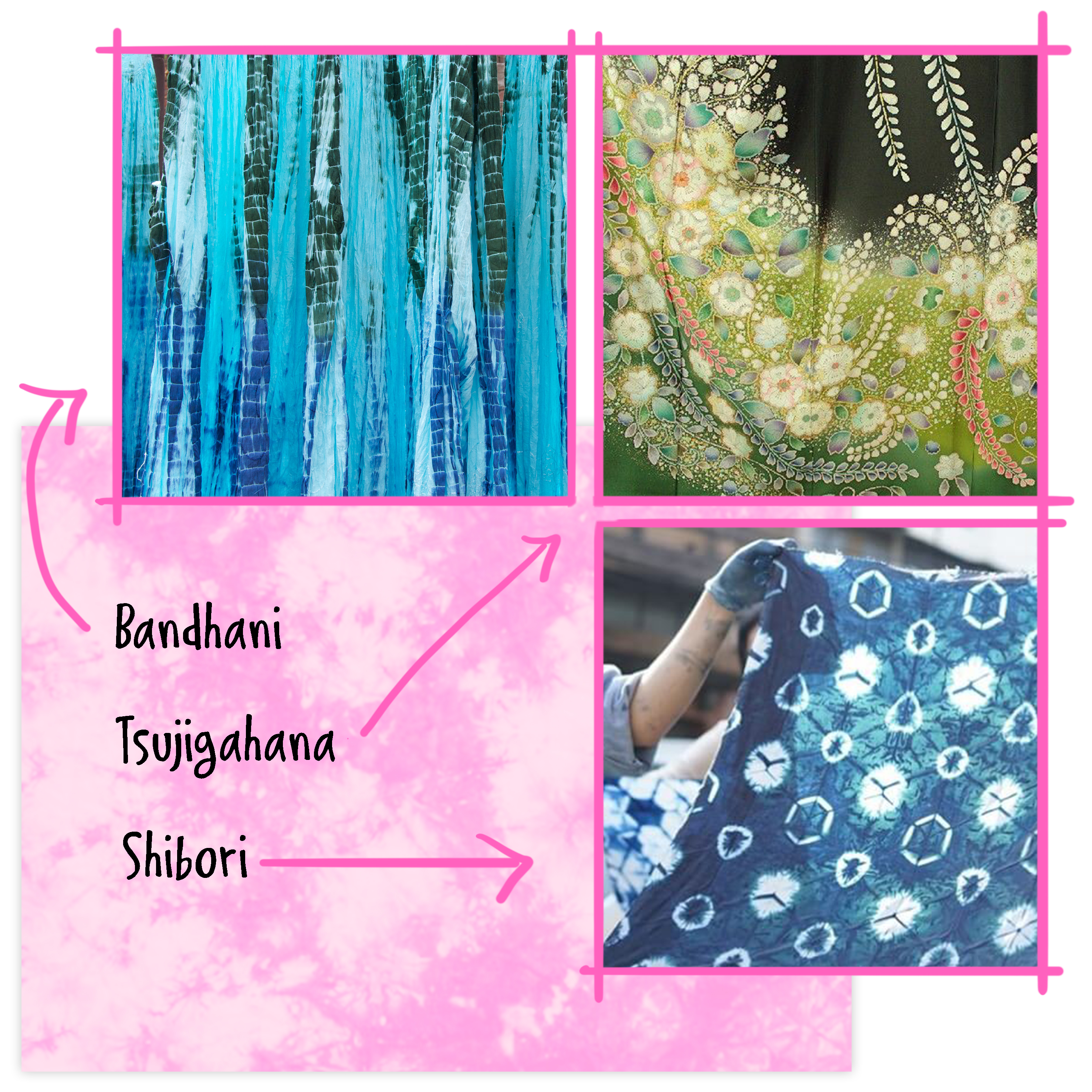 In the eighth century AD in Japan and Indonesia another form of Tie Dye developed called Shibori which involved the creation of small high-strength seams on the garment which, after immersion in color and drying, were untied forming minute designs for decorative purposes. Another relevant Tie Dye technique was Tsujigahana, developed in China from 1500 to 1600: the fabric was first decorated with ink and then immersed in dyeing, so as to obtain games of light and shadows. This technique was so much appreciated that some original pieces from that period can still be found in museums.

Tie Dye spread to America during the Great Depression of the 1930s. At that time, in order to drive away bad thoughts, women loved decorating the home or reviving fabrics and clothing through the Tie Dye technique which, with minimal expenditure, sometimes nothing, allowed them to spend time obtaining excellent results. The boom of the Tie Dye came in the 60s/70s when the Hippie movement made it its reference style. 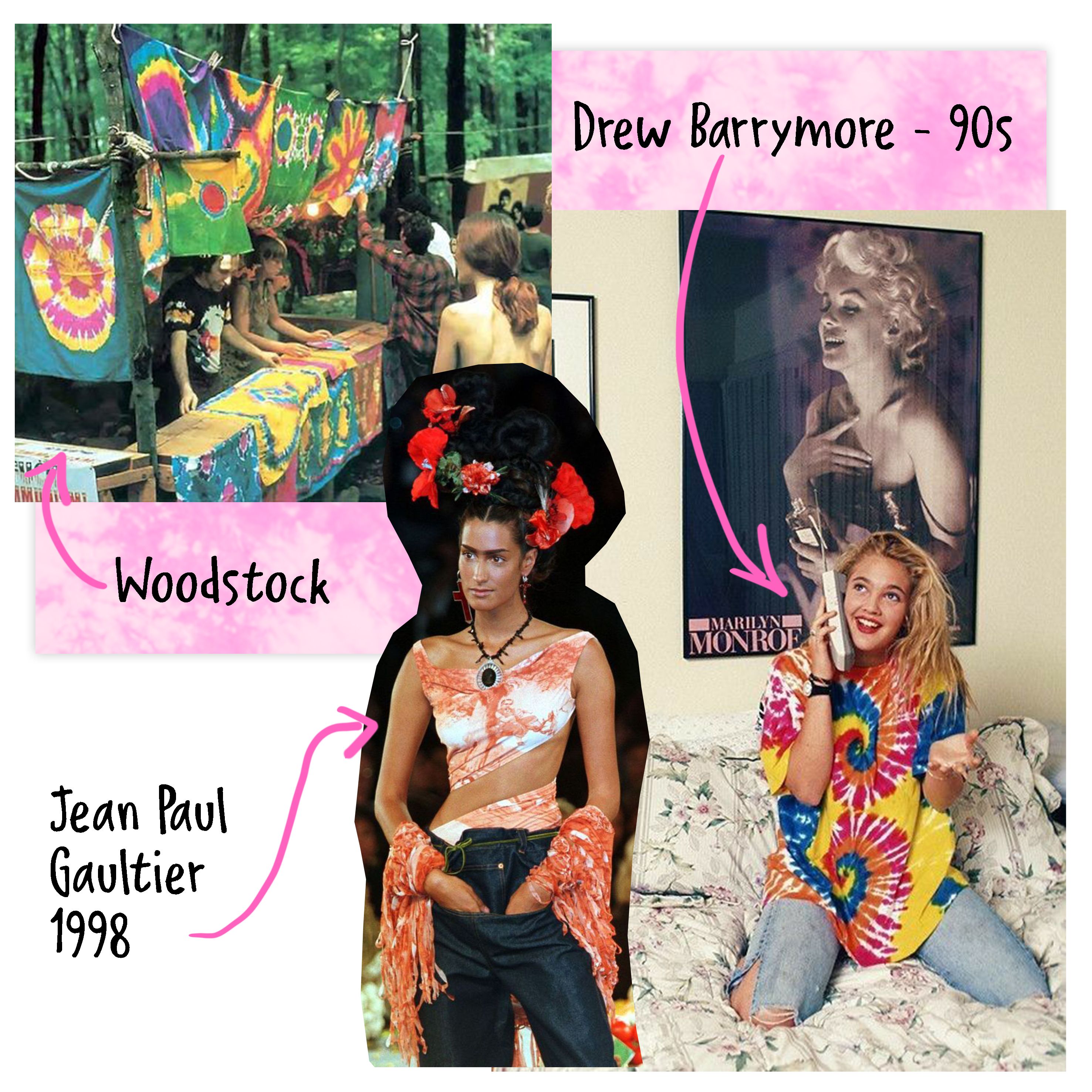 From the streets to big music events such as Woodstock, young people used Tie Dye t-shirts, sweatshirts, scarves, banners and blankets, creating the most iconic looks of the time. In the 1980s, even the most famous fashion houses began to incorporate this technique into the collections; the new dyes and the advancement of textile technologies allowed them to create garments with more refined processes and minimal loss of color.

From ancient cultures to the 1960s movements, the Tie Dye has come a long way but it is still part of the most influential trends today. For the SS20 many Maison have used this technique for their garments. In a setting that transpires respect for nature and sustainability, the Maison Dior proposes Tie Dye garments: jumpsuits and flared skirts are colored in shades of blue gray to create a washed-out denim effect. Donatella Versace mixes this technique with a tropical jungle: between palm leaves and sensual silhouettes, the Tie Dye in an elegant key appears on tights, sweatshirts and dresses. MSGM makes this trend the cardinal motif of its collection: oversized shirts and trousers are tinged with strong shades mixed together, as well as mini dresses that are covered with irregular and modern flowers through the Tie Dye. Finally Alberta Ferretti who makes denim the main fabric of her fashion show but sees it in a Tie Dye key, a choice appreciated by many celebrities, such as Dua Lipa and Chiara Ferragni, who immediately inserted a piece of their own into their wardrobe.

Bacon: duvets that will envelop you with their urban shapes